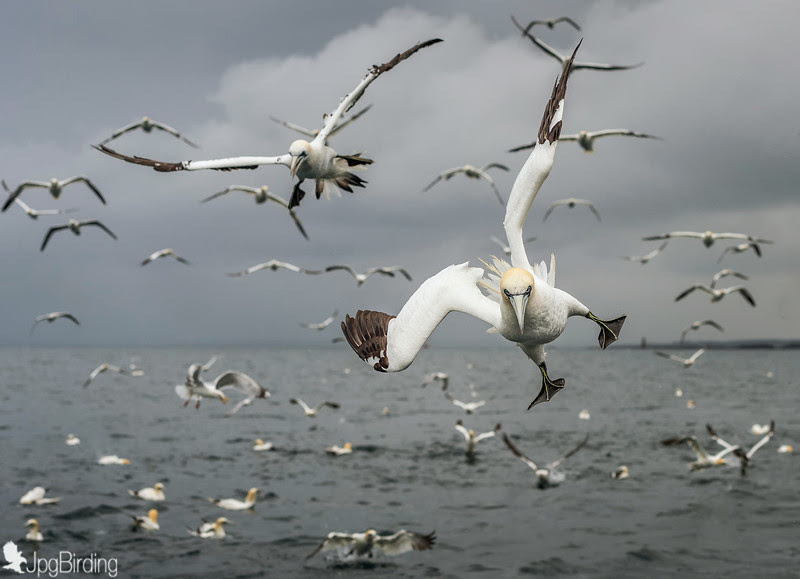 It pays to do your research and plan well in advance for a trip to a small island off the eastern coast of Scotland, if you want to take fantastic images of the thousands of gannets that breed there each year, that is. When so many frenzied birds fill the sky, how do you maintain focus? What lens do you use? Where is the best place to be to get "the" shot? Find out those answers and plenty more here.
The picture was taken on July 8, 2014, on the Scottish island of Bass Rock after a six-month wait for this trip to the UK. The schedule was tight and the photographic agenda ambitious. First, there was the flight from Madrid to Manchester, followed by the drive up to Bempton Cliffs for a day and a half visit. We then continued on to Seahouses on the Farne Islands. This was followed by a visit to North Berwick for a day on the Isle of May. The final day, and the highlight of the trip, was our visit to the island of Bass Rock.

"I was finally aboard the small fishing boat that would take us to the island — home to one of the largest breeding colonies of gannets in the world."


I always try to tie up all of the loose ends with detailed planning to make the most of every moment on my photographic journey. However, there are always meteorological uncertainties when setting the dates for a trip so far in advance (January), and this is particularly true considering the constantly changing weather of Scotland. Note that my worries were not unjustified, as cancellations of the boat trip to this island are quite frequent, mainly due to bad sea conditions that may occur. Also, keep in mind that this boat only runs once a week with eight photographers onboard, over a period of about three months. This is why just getting to land on the island would be an achievement. My fears disappeared when the great day of Bass Rock arrived. I was finally aboard the small fishing boat that would take us to the island — home to one of the largest breeding colonies of gannets in the world.

The day dawned gray, promising rain, which didn't take long to appear and did not leave us during our entire visit to the island. It was almost an hour's sailing from Dunbar to Bass Rock. While approaching the island, we were shocked by the number of white dots surrounding it; they were thousands of gannets.

"You must look for creative and precise compositions of close-ups of the gannets for individual portraits, couples and groups."


The tour to Bass Rock is in two parts. The first is the landing on the island with a considerable height to climb above the level of the lighthouse. In this first part, you can see hundreds of gannets all around you just a few feet away. You must look for creative and precise compositions of close-ups of the gannets for individual portraits, couples and groups. This is the biggest challenge, as well as capturing the great number of continuous landings of gannets around you. You can use telephoto lenses ranging from 70–200mm to 600mm to try to get all different kinds of scenes. In my case, those two lenses plus a 300mm lens, along with my two Nikon bodies (D4 and D7100), a waterproof cover for the lens and a tripod were all used to capture as many different shots as possible in Bass Rock.

"Half a dozen boxes of fish were waiting to be thrown from the boat (referred to as chumming) to elicit the madness of the 'gannets invasion.' "


The second part of the tour is "chumming." We returned to the boat, left the island and moored about 300 yards (275 meters) off the island. Once we started to leave the island, dozens of gannets from above began to follow us. Half a dozen boxes of fish were waiting to be thrown from the boat (referred to as chumming) to elicit the madness of the "gannets invasion."

We eight photographers tried to place ourselves at the best possible positions on the boat. As soon as the ship was turned to a favorable position for the wind and waves, the gannets that had already begun to follow us, knowing well that food was waiting for them, took up their positions.

Seeing a cloud of gannets flying over you is truly impressive. 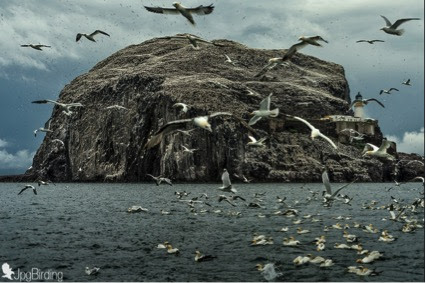 "At first I was overwhelmed by all of the movement around me, almost losing a sense of where I needed to point my lens."


As the fish were tossed into the sea, the gannets began diving down like arrows. I adjusted the settings on my 70–200mm lens mounted on the D4. Since the gannets were close, there was no problem with distance; however, all possible autofocus speed was needed. I had a clear idea in my mind about what I wanted to get: one was of gannets entering the water at the precise moment their beaks touched the surface; the other was scenes of gannets in flight. At first I was overwhelmed by all of the movement around me, almost losing a sense of where I needed to point my lens. I realized that I had to maintain complete concentration at that moment. I found that my best choice was to focus on one gannet in the air and follow him while shooting continuously.

I remember having to change memory cards during the chumming. I took no less than 1,500 photos in just over half an hour of this frenzy. And by "frenzy" I am referring to both the gannets and the photographers. Obviously, 90% of the images ended up in the trash. This was one of the good captures.
POST PROCESSING
The image was processed in Adobe Camera Raw, Photoshop CS6 and Nik Software's Dfine and Viveza plugins.

1) These are the settings I used in Adobe Camera Raw.

2) I then exported the image to Photoshop CS6 for the final processing. It would not require substantial processing, just balancing the light and highlighting the protagonist while maintaining the overall gray tone of the cloudy day. I always try to respect the authenticity of the original picture, although sometimes I like to add an artistic touch to take advantage of a good bird pose or similar subject. 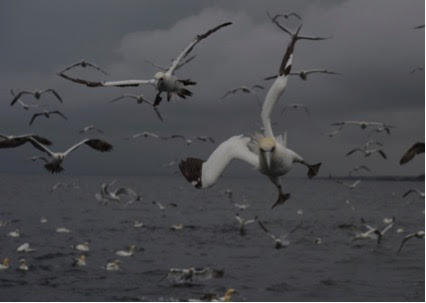 
3) I did not want to see any gannets cut off by the frame's edges in the final version, so I decided to remove them. I selected the “partial” gannets along the edges and applied the Content-Aware tool (Edit > Autofill > Content-Aware).

4) Then I proceeded to reduce the noise in the image with the Nik Dfine plugin using the default settings.

6) In Nik Viveza plugin, the main gannet was selected with a Control Point, and the Brightness was increased only in that area.

7) Returning to Photoshop, I added a Brightness/Contrast adjustment layer to the overall image, increasing Brightness to +5 and Contrast to +6.

8) Finally, I sharpened the image by applying the High Pass filter. To do this, I duplicated the background layer, and with this layer active I selected Filter > Other > High Pass. I changed the Radius to 1.9 and then set the layer blending mode to Soft Light.
TIPS
1) Understand your equipment: choosing the best possible camera/lens combination is essential.

2) In this case, the choice of camera with the highest frames-per-second rate combined with a short telephoto zoom lens was the right decision.

3) An accurate weather forecast for the place and time of the shoot will result in better pictures.
Publicado por Unknown en 0:24

Entrada antigua Inicio
Suscribirse a: Enviar comentarios (Atom)
VOLVER a / BACK to .... JpgBirding.com